The Muldoon Courthouse, built in 1890 is now considered a Texas historical landmark:

Located in southwest Fayette County, the Muldoon area was first settled in the 1830s. The community was named in honor of Father Miguel Muldoon and is situated on land acquired in 1831 through a Spanish land grant from Stephen F. Austin. Father Muldoon was of Irish heritage, educated in Spain and moved to Mexico in 1821 when he entered the priesthood. In Mexico, he met Stephen F. Austin, who gave eleven leagues of land to Muldoon in return for his ministry to the colonists. Four of these leagues were located in Fayette County.

The San Antonio and Aransas Pass Railroad was built through the area in 1887 and the town grew quickly around it. James Kerr established the first post office in January 1888. Within a decade, Muldoon boasted its own physician, general merchandise stores, churches, a barber shop, saloon, meat market, blacksmith shop, hotel, woodworking shop, lumberyard, cotton gin, railroad depot and a school. The Muldoon courthouse building is a rarity. Constructed in 1890, it is one of six justice precinct courthouses that were built in Fayette County. Over the years, it has been used as a mattress factory, canning kitchen, site for quilting bees, voting location, community meeting place and a museum. Muldoon is also known for its “Muldoon blue” sandstone. Taken from the A. B. Kerr quarry, the sandstone was used in the construction of several sites in Texas, including courthouses, a jail, churches and later in the construction of Galveston and other coastal jetties. Muldoon was once a thriving community, but declined as the railroad industry became less relevant. (2014)

Marker is property of the State of Texas" 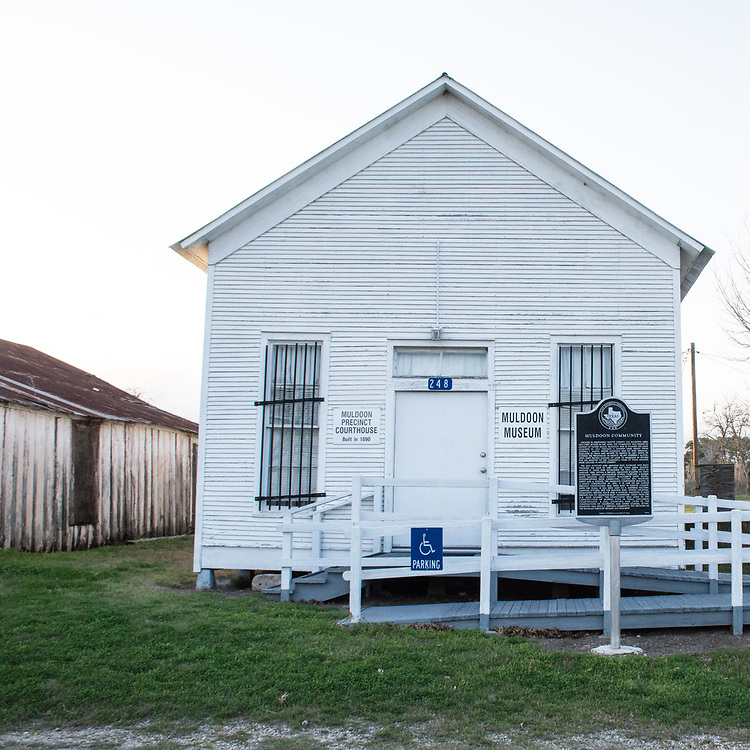